Every once in a while someone notices the first commit in the Go repo is dated 1972:

Obviously something silly is going on, and people usually stop there. But Go’s actual version control history is richer and more interesting. For example, there are a few more fake commits and then the fifth commit is the first real one:

Why does that commit have a different trailer than the three fake commits?

Go started out using Subversion, as part of a small experiment to evaluate Subversion for wider use inside Google. The experiment did not result in wider Subversion use, but the SVN=111041 tag in the first real commit above records that on the original Subversion server, that Go commit was revision 111,041. (Subversion assigns revision numbers in increasing order, and the server was a small monorepo being used for a few other projects besides Go. There were not 111,040 other Go commits that didn’t make it out.)

The SVN tags continue in the logs until July 2008, where we see one last SVN commit and then a new form:

This was the first commit after Go moved from a lightly-used Subversion server to a lightly-used Perforce server. Google was a very heavy Perforce user due to its use of a single giant monorepo for most code. Go was not part of that monorepo world, and at the time, projects that didn’t have to be on the heavily-loaded main server were hosted instead on secondary ones.

At the transition to Perforce, you can see the introduction of telltale DELTA=, OCL=, and CL= tags. Perforce imposes a linear ordering on change lists, like Subversion revisions, but each change list ends up with two sequence numbers: it is assigned one when it is created and uses that number while it is a local, pending change list, including in our code review systems. Then, when it is submitted and becomes part of the official history, it is assigned a new number, to keep submitted changes in order. The OCL= is the original change list number, while the CL= is the final one. The R= line means that gri (Robert Griesemer) reviewed the change before it was submitted, using our internal code review system, then called Mondrian. Because the server was so lightly used (and presumably the review so quick), no new change lists had been created or submitted while this one was pending, and its final submission reused its original number instead of needing to create a new one.

Many other changes have the same OCL= and CL= because they were created and submitted in a single Perforce command, without review, like the next one:

You can also see from this that the DELTA= line is added by the code review system, not Perforce: this unreviewed change doesn’t have it. (The last two lines are being provided by the git log --stat command as we explore the Git version of these changes.)

The bulk of the pre-open-source development of Go was done on that Perforce server.

The OCL= and CL= lines continue until we get to October 2009, when they switch to a new form:

That commit introduces yet another kind of trailer line, which says http://go/go-review/1013012. At one point that link pointed, inside Google, to an internal version of the Rietveld App Engine app, which we used for code review on the way to submission to a private Mercurial repo on Google Code Project Hosting. We were doing that conversion, in October 2009, as part of the preparation to open-source Go in November.

It was at this point, during the conversion to Mercurial, that I introduced the “hello, world” commits. The Subversion and Perforce repos had been Google-internal servers, and we had stored essentially all the Go code in the world alongside the Go implementation. We each had “user directories” like /usr/rsc in the repo. Those directories contained various code that wasn’t going out in the release, whether because it was targeting Google-internal technologies or because it was simply not worth publishing. (You can still see references to /usr in a few commit messages that did make it out.)

For the conversion, I ended up with a directory full of patches, one per commit, and a script to run the patches to create a new Mercurial repository. Then I edited the patches (with automated help) to remove the files that weren’t being released, including the entire /usr tree, and to add the new open-source copyright notices to every file.

This took me about a week, and it was annoyingly difficult. If I removed a file from some patches but then it got renamed in others, Mercurial would complain about the rename using a file that hadn’t been created in the first place. And if I added a copyright notice when the file was created, I had to be careful to update later patches to not have merge conflicts when changing the top of the file. And so on. I remember thinking that it was like being a con man who constructs an elaborate false identity and struggles to keep it all straight.

A month earlier, I had created object file parsing packages like debug/macho, and as test data for each of those packages I checked in an object file compiled from a trivial “hello, world” program, along with the source code for them:

This was the original commit that introduced src/pkg/debug/macho/testdata/hello.c, of course. As I added copyright notices to files, it seemed wrong to add a copyright notice to that hello.c file. Instead, since I had the repo split into this patch-file-per-commit form, it was easy to create a few fake commits that showed at least part of the real history of that program, as an Easter egg for people who looked that closely:

The July 1972 commit shows the very first “hello, world” program, copied from Brian Kernighan’s “A Tutorial Introduction to the Language B”:

Various online sources refer to this as a “book”, but it definitely was not. It was a printed, 17-page document that was later included as half of January 1973’s “Bell Laboratories Computing Science Technical Report #8: The Programming Language B” (still not even close to a book!). The “hello, world” program appears in section 7, preceded by the less catchy “hi!” program in section 6. As I write this blog post in 2022, I cannot find any online reference for the B tutorial being originally dated July 1972, but I believe I must have had a good reason.

The January 1974 commit converts the program to C, as found in Kernighan’s “Programming in C — A Tutorial”. The linked PDF is a retyped copy from Dennis Ritchie, without a date, but Ritchie’s “C Reference Manual” technical memo dated January 15, 1974 cites Kernighan’s tutorial as “Unpublished internal memorandum, Bell Laboratories, 1974”, implying that the tutorial must have been written in January as well. That C program was shorter than what we are used to today, but much nicer than the B program:

I skipped over the presentation in the first edition of The C Programming Language, which looks like:

The April 1988 commit shows the program from the “Draft-Proposed ANSI C” version of the second edition of The C Programming Language:

The email addresses in the commits are also period-appropriate, although Mondrian’s R= and DELTA= tags clearly are not: there was no code review happening back then!

For what it’s worth, I’ve since heard from many people about how the 1972 dates have broken various presentations and analyses they’ve done on the Go repository as compared to other projects. Oops! My apologies. (I also heard from someone who was analyzing Mercurial repos for “branchiness” and decided to use the Go repo as a large test case. Their program said it had branchiness 0 and they spent a while debugging their program before realizing that the repo really was completely linear, thanks to our “rebase and merge” policy.)

We published the Google Code Mercurial repo on November 10, 2009, and to mark the occasion we added one more Easter egg. A footnote in Brian Kernighan and Rob Pike’s 1984 book The Unix Programming Environment says:

Ken Thompson was once asked what he would do differently if he were redesigning the UNIX system. His reply: “I’d spell creat with an e.”

This refers to the creat(2) system call and the O_CREAT file open flag.

Immediately once the release was public, Ken mailed me a change fixing this mistake:

Sadly, we didn’t execute the joke perfectly, in that the code review went to our internal Rietveld server instead of the public one. So the very next commit updated the code review server in our configuration.

But here, for posterity, is the review, preserved in my email: 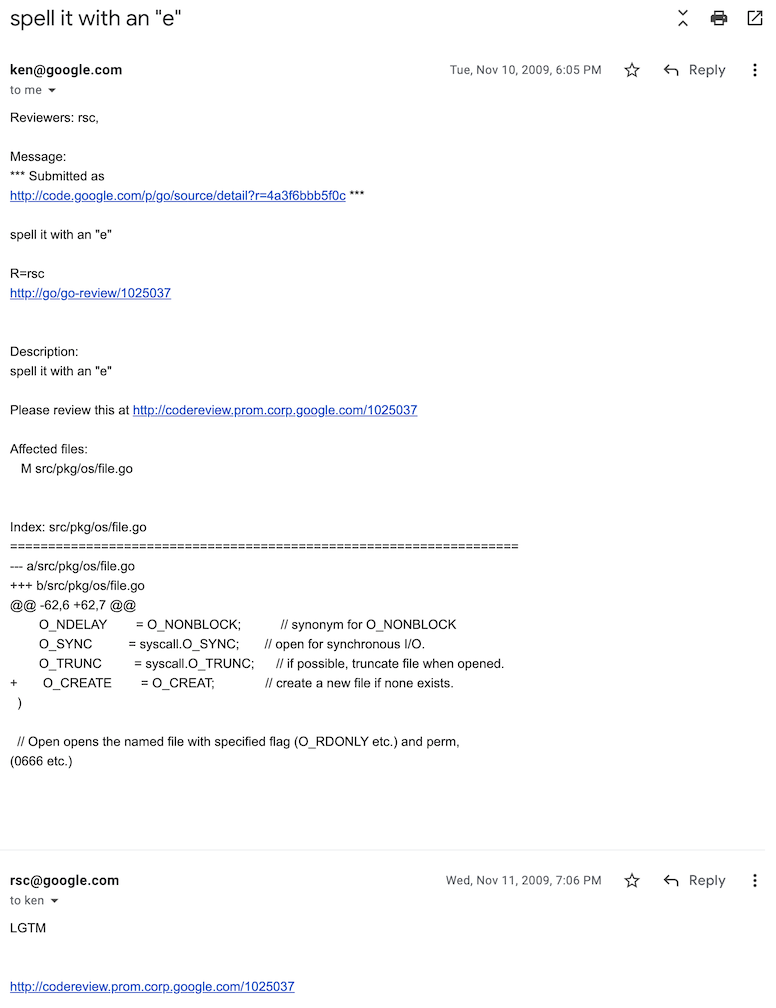 So things stood from November 2009 until late 2014, when we knew that Google Code Project Hosting was going to shut down and we needed a new home. After investigating a few options, we ended up using Gerrit Code Review, which has been a fantastic choice. Many people think of Go as being hosted on GitHub, but GitHub is only primary for our issue tracker: the official primary copy of the sources is on go.googlesource.com.

You can see the transition from Mercurial to Git in the logs when the R= lines end, followed by a few completely unreviewed commits, and then Reviewed-by: lines begin:

As part of the conversion from Mercurial to Git, we did not add visible lines to the commit bodies showing the old Mercurial hashes, but we did record them in the underlying Git commit objects. For example:

And that’s the end of the story, until we move to a fifth version control system at some point in the future.